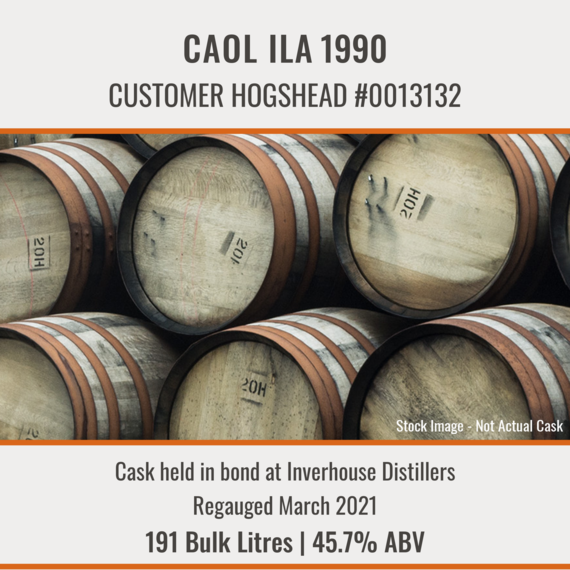 This lot offers the fantastic opportunity to own one cask of Caol Ila single malt scotch whisky, distilled in 1990.

Originally filled with Caol Ila spirit on 13th November 1990 the whisky has since been maturing in a Hogshead (#0013132) which is currently held in bond at Inverhouse Distillers.

The cask was re-gauged in March 2021, summarising the following:

1) the cask photo shown is for display purposes only and is not the actual cask being sold.

2) the sample is shown for confirmation of the colour only and is not included in the sale.

NOSE:
Toffee sweetness with a smoky nose that grows, giving a beautiful balance of cold smoked salmon, ash and salted caramel.  Deeper bouquets of black tea, coal and liquorice. At the back there is deep red stoned fruit and musky lemon peel.  A lot going on but all balanced beautifully.

PALATE:
Spicy, but light, with the smoke and peat less than the nose suggests.  Harmoniously taking the smokyiness and spice against lemon; sweet pipe tobacco against salty minerality; and stewed dried fruit with pears.  The smoke and peat does not dominate, but hovers over the deep muscovado sweetness, like a campfire of driftwood from the beach.

BODY:
Oily and creamy in the mouth, full wraparound of flavours.

FINISH:
Long with warming spice, that dries to ash.

- Annual storage fees (currently 50p per week) and any cask transfer admin fees will become payable by the buyer.

- Please note if the new owner is a UK revenue trader (business or private individual connected to the trade), they will need to be registered with HMRC and hold a WOWGR certificate.