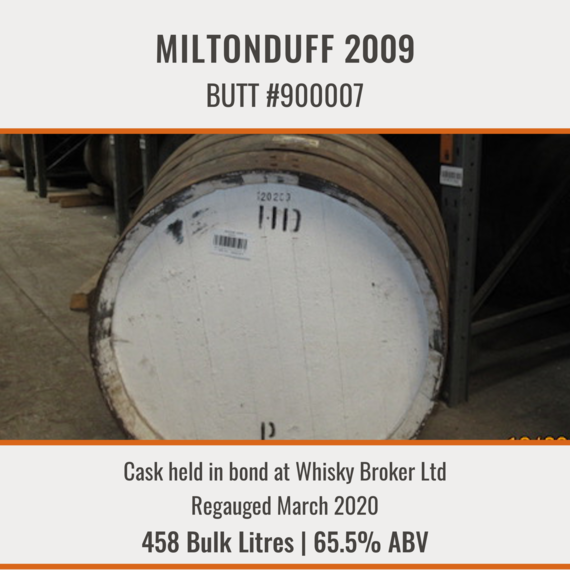 This lot offers the fantastic opportunity to own a butt of Miltonduff single malt scotch whisky, distilled in 2009.

Originally filled with Miltonduff spirit on 18th February 2009, the whisky has since been maturing in a Butt (cask number 900007) which is currently held in bond at Whisky Broker Ltd.

The cask was regauged on 16th March 2020 summarising the following:

1) the sample is shown for confirmation of the colour only and is not included in the sale (it has been consumed to populate tasting notes!).

NOSE: Fresh and well balanced.  Honeycomb with a slight waxy sheen that is countered by vibrant oak that cuts through the sweetness.  Think of warm pancakes with maple syrup.

PALATE: Fresh oak with a large serving of baked gingerbread.  There is some grapefruit sharpness that is tempered with a soothing fruitiness of stoned apricots bringing up the rear.  Mid section shows the typical floral lightness and the balance is very well behaved with the honey, from the Nose, still present, at the end, with barley sugared cereal.  The oak from the bourbon butt is clean and fresh throughout.

BODY: Typical light body as expected by a Speyside.  The mouth is prickled with the spice and balanced by the syrup sweetness.

FINISH: Medium to long finish that is spiked with the echo of ginger, clove and liquorice with a mellow milk chocolate aftertaste.