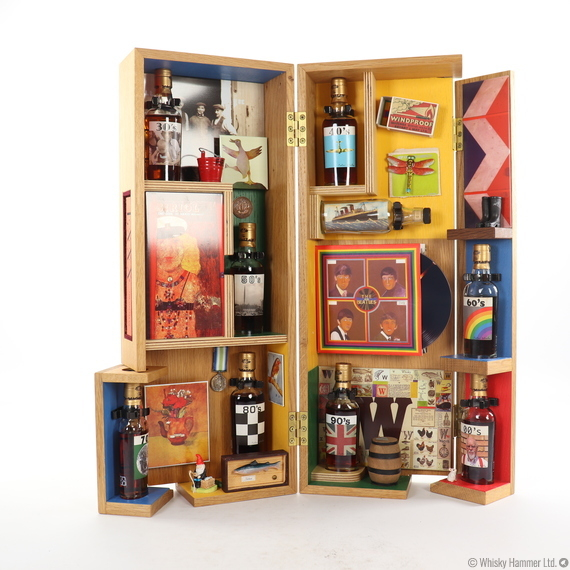 A fantastically rare and well presented collection of eight miniatures, representing each decade of Sir Peter Blake's life and The Macallan of that decade.

The second collaboration with Sir Peter Blake, this was released in celebration of his 80th birthday in June 2012.

1930s: a black and white image of Macallan distillery workers, a Fire bucket (representing water and fire) and a Dancing tin duck (a replica of one of Sir Peter’s favourite art works from his own collection).

1940s: Windproof matches (representing air and fire), a Tin damsel fly,  a Small bottle with a painting of the Queen Mary (one of the first pieces of art Sir Peter Blake bought as a student in the late forties) and a pair of Wellington boots (representing an original pair of Tom Thumb boots that Sir Peter has in his collection).

1950s: a She-Devil painting on the cover of the book and a Halfpenny.

1960s: a CD with the cover of Beatles painting by Sir Peter Blake. The CD includes an old advertisement created by DH and a film by Phil Sansom on the making of the Blake @ LXXX box.

1970s: a Teapot and roses painting and a small medallion.

1980s: a Robin painting, a Gnome fishing and Spey Salmon (indicative of the fishing on the Macallan’s Easter Elchies Estate).

1990s: a collage, W for Whisky, reminiscent of Sir Peter Blake’s style and a Macallan cask (representing the importance of the oak casks in the making of The Macallan whisky).

This collection is one of just 250 hand-made works of art by Sir Peter Blake.