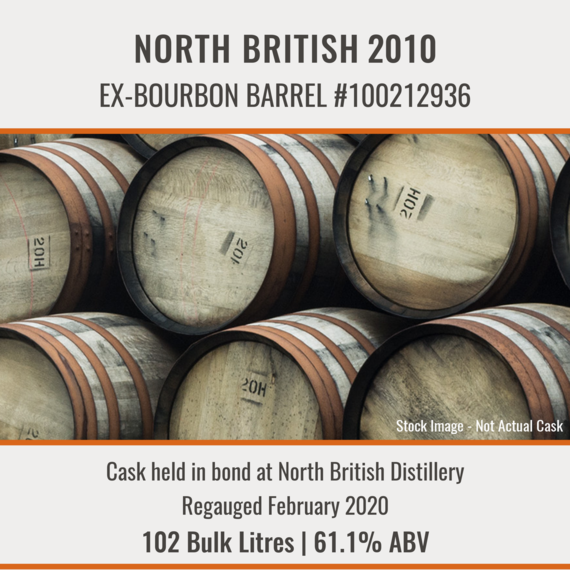 The North British Distillery Company Ltd is a Scottish grain whisky distillery located in south western Gorgie district of Edinburgh. Established by a group of independent distillers in 1885, it is now a joint venture company between Diageo plc and the privately held Edrington Group. It is Edinburgh’s last working distillery, widely known as the "NB".

This lot offers the fantastic opportunity to own one cask of North British single grain scotch whisky, distilled in 2010.

The cask was regauged on 10th February 2020 summarising the following:

Please note the sample is shown for confirmation of the colour only and is not included in the sale (it has been consumed to populate tasting notes!).

NOSE: Quite light. Sweet and cereal forward. Light citrus oils with a development of vanilla and butterscotch in the middle. After a while there is a ghost of newly made egg custard.

PALATE: More power than suggested by the Colour and Nose. Nicely spicy and with a sweet warming of toasted cerals. The tongue tingle remains right to the end but there is an overlap of the butterscotch sweetness. Very well behaved and structured right to the end.

BODY: Delicately light mouth-feel with a softness that builds to the full power of the spirit.

FINISH: Long with decidely spicy bite, but muffled in vanilla sweetness. Little afterglow as would be expected from a grain spirit.