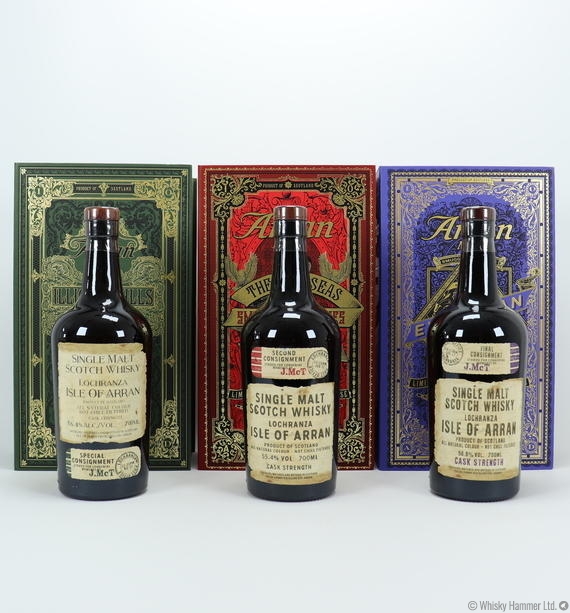 The Smugglers' Series from Arran is a trilogy of three limited edition single Malts acknowledging the rich history of whisky distillation from the home island.

The Smugglers’ Series Vol. I ‘The Illicit Stills’ pays homage to their forebears with an Arran dram of robust body and a heavier peat influence more redolent of the whisky produced on the island in days gone by. The presence of the heavily peated Arran is perfectly balanced by the sweetness of older Bourbon barrels. In the background the rich and fruity influence of Port Pipes has resulted in a fresh, full-bodied and complex dram evocative of their independent character.

Smugglers’ Series Vol.2 ‘The High Seas’ tribute is paid to the exuberant character of those striving to outwit the Government’s representatives in the pursuit of the production of the famed Arran Waters. This dram is a powerful marriage of whisky matured in the finest rum casks with time-honoured peated spirit and a rich layer of first-fill Bourbon barrel adding sweetness and fruit. The use of rum casks in the maturation serves as recognition of Arran’s importance, in years gone by, in the trade of diverse, black market liquor. The resulting liquid is complex, full of character and a perfect tribute to these independent characters of Arran.

Smugglers’ Series Vol.3 ‘The Exciseman’ we conclude our popular series which pays tribute to the exuberant character of those striving to outwit the Government’s representatives in the pursuit of the production of the famed Arran Waters. The Madeira casks used in this final volume, are similar to the ones utilised by Arran’s illicit distillers, who often stored and transported locally produced whisky in old Madeira casks brought over from the continent by their smuggling counterparts. The Quarter Casks are a nod to the type of small casks which would have been the easiest to transport.