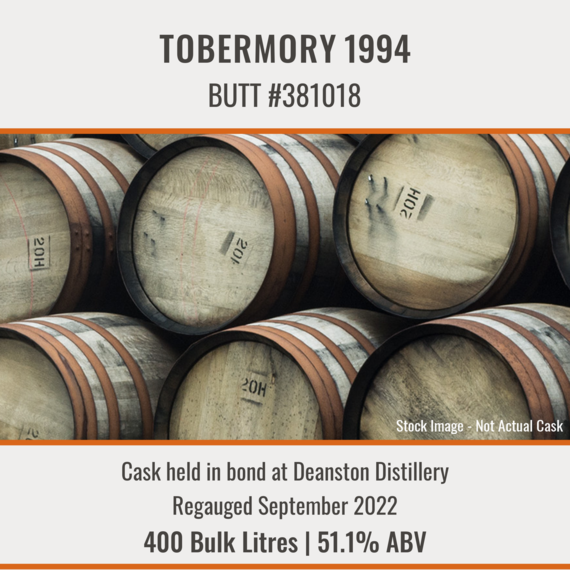 This lot offers the fantastic opportunity to own one cask of Tobermory single malt scotch whisky, distilled in 1994.

Originally filled with Tobermory spirit on 22nd July 1994 the whisky has since been maturing in a butt (cask number 381018) which is currently held in bond at Deanston distillery.

The cask was regauged on 23rd September 2022 summarising the following:

Please note the sample is shown for confirmation of the colour only and is not included in the sale (it has been consumed to populate tasting notes!).

NOSE:
On the nose this is vegetal and mineral, with a faint hint of the sea.  Initially it is soft and sweet, but underneath there is damp forest depth with snapped fresh rhubarb with a mere hint of dill pickled cucumber.  Finally there is a waft of gentle wood and spice.

PALATE:
The woody spice tempered with aged orange burst onto the palate, underscored with a sprinkle of white pepper and sea salt with some pickle on the side.  The balance holds everything in check and then deeper there are layers of herbal notes, sugar, and ripening apricot.  On the dry down the spice reemerges along with deliciously drying oak and vanilla.

FINISH:
Medium finish that is softer than the nose initially suggested, with lasting complexity.

- The buyer will also be liable for a one-off £30 ownership transfer fee payable to Deanston (Distell International Limited).