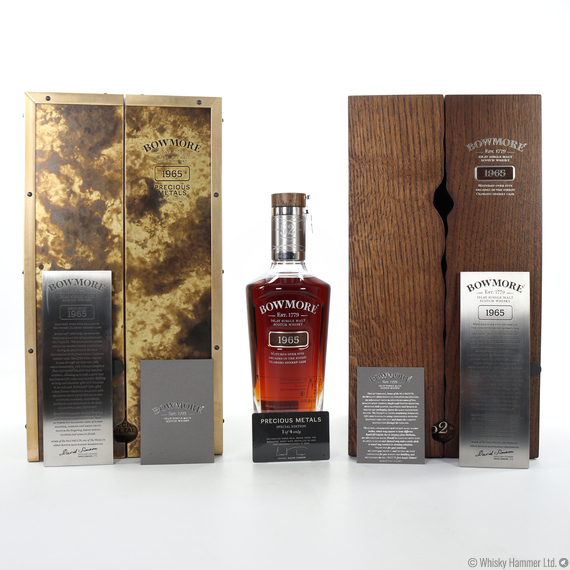 Distilled by Bowmore in 1965 and matured for 52 years, this is the third edition from the highly-esteemed 'Bowmore 50 Year Old Vaults' series.

Using the finest Oloroso sherry casks, this exceptional cask strength release from Bowmore is one of its rarest whiskies to date. The whisky contained is said to be some of the first to pass through Bowmore's then-new heated stills in 1965.

A hand-crafted oak cabinet provides a fitting presentation for this classic from the legendary Bowmore No.1 Vaults.

One of only 232 bottles of the 52 year old Bowmore ever released.

The Precious Metals special edition consists of a handcrafted oak case adorned with a brass plaque made from the original Bowmore spirit safe first installed in 1924 and decommissioned in 2020. Designed by Master craftsmen, John Galvin, the Bowmore 1965 ‘Precious Metals’ celebrates the golden age of the distillery throughout the 1960s and is one of just four individual presentation boxes created. A genuine piece of the distillery’s legacy, this bespoke collectable piece comes with a certificate of authenticity to mark its place in the history books of Scotch whisky.

Find out more about this fantastic release in our publication here.