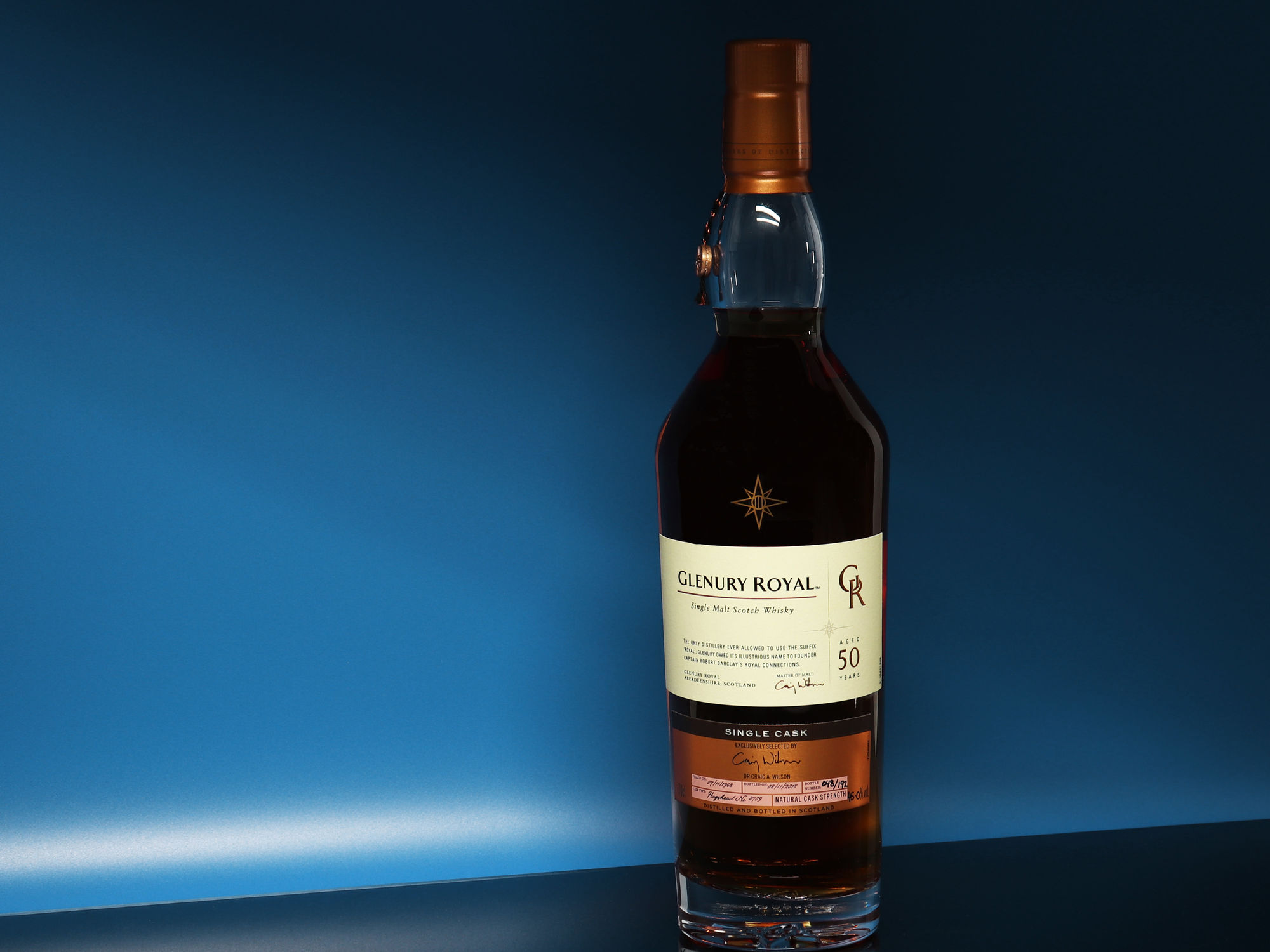 Glenury Royal, one of just 3 distilleries to be granted permission to use the 'Royal' title; alongside Brackla and Lochnagar. Official bottlings from the distillery are difficult to come by nowadays, making them valuable additions to any collection. Glenury Royal released a number of official bottlings before their closure in 1983, including a 36 year old and a 40 year old. Today, Diageo own the rights to Glenury Royal and in 2003 they released a special 50 year old bottling, which was limited to just 498 bottles. 15 years later, another 50 year old Glenury cask was found in Diageo's extensive stocks throughout Scotland and bottled as part of their Casks of Distinction series. This series is the private sale of individual casks of rare and exceptional single malts. These casks are hand selected by a team of whisky experts under guidance from Master Blender Dr. Craig Wilson, each cask is entirely unique and incredibly rare. Bottled in 2018, with just 192 bottles produced. Both of these spectacular bottles are available and open for bidding in this months auction!

Glenury distillery was founded by Captain Robert Barclay in 1824 near Stonehaven, Aberdeenshire. Captain Barclay was a Scottish walker in the early 19th century, and was known as the celebrated pedestrian. Barclay is famously known for walking 1000 miles in 1000 hours for 1000 guineas. He was also an avid gambler, particularly enjoying the company of prize fighters where he would develop training regimes for potential champions. To top everything off, Barclay was also a member of parliament in Westminster, and a friend of royalty.

The Captain sought to continue agricultural improvements that his father started, and set up the company Barclay, Mcdonald & Co to build Glenury distillery. The excitement of the distillery's opening was quickly diminished as a fire swept through the distillery just weeks later, destroying the malting facilities. And, to make matters worse, a short time after the fire a distillery worker suffered fatal injuries after falling into the boiler during an inspection. The Aberdeen Journal reported on 11th May 1825 - “On Saturday last, about one o’clock, Andrew Clark, one of the workmen employed at Glenury Distillery, being sent to examine the state of the great boiler, by some unfortunate accident fell backwards into it and was so dreadfully burned, that he died in extreme agony at 7 o’clock in the evening.”

Glenury managed to overcome these adversities, and enjoyed healthy production for the next decade before the distillery was granted permission to use 'Royal' in their title. Perhaps Captain Barclay used his prominence in Westminster to facilitate this... and King William IV was known to enjoy a Glenury dram, with bottles often ordered to the Royal household.

Captain Robert Barclay passed away in 1854 after being kicked by a horse, and Glenury Royal distillery was subsequently put to auction around 3 years later. Ownership transferred to William Ritchie of Glasgow, who's family ran the distillery up until 1928 when production ceased due to a restriction of the use of barley during the First World War. In 1936 Glenury Royal was sold to Glenury Distillery Company Ltd for £7500, who then sold it to Associated Scottish Distilleries just 2 years later for £18'500. ASD was owned by Joseph William Hobbs, a former bootlegger during prohibition who went on to own Glenury Royal, Glenlochy, Bruichladdich, Glenesk, Fettercairn and Benromach. Glenury Royal distillery operated for long after the Captain Robert Barclay era, but eventually fell victim to the whisky industry downturn in the early 1980s, and was sadly demolished.

Diageo, and a selection of independent bottlers, are doing their part to keep Glenury Royals legacy going.